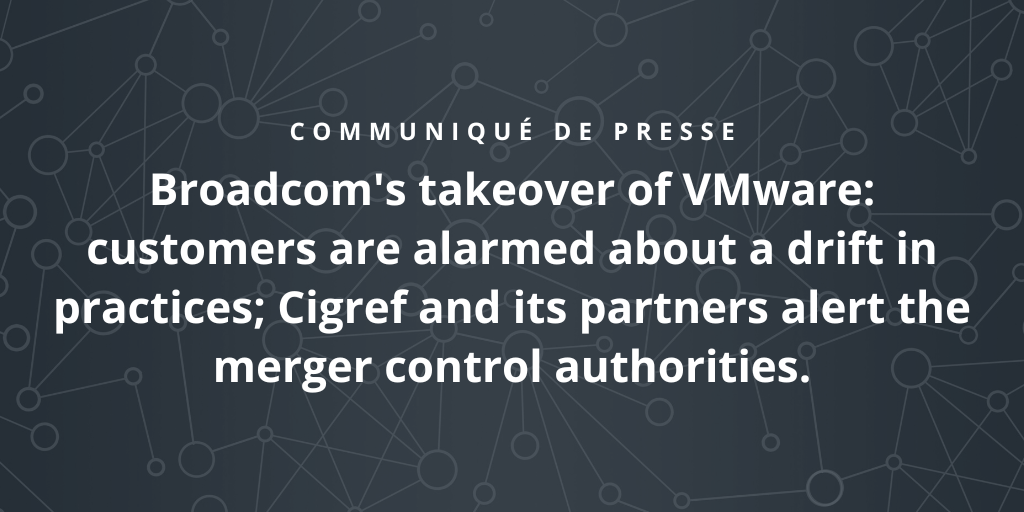 Cigref members have expressed strong concerns since the announcement of the acquisition of VMware by Broadcom. Cigref and other European professional user associations have alerted the European Commission to the risks of abusive practices that this takeover could lead to, given VMware’s dominant position in virtualisation services and the contractual and commercial practices observed by Broadcom’s customers.

The proposed $61 billion takeover of VMware by Broadcom – one of the largest acquisitions in the industry – is causing the greatest alarm among Cigref members. VMware is the world leader in virtualisation products and its solutions are used by 90% of large public and private organisations. For example, all 155 large French companies and public administrations that are members of Cigref are, without exception, VMware customers. Although VMware is dominant in the virtualisation market, it does not appear to engage in practices that could be described as abusive, and Cigref members who are VMware customers have not expressed any difficulties with their commercial and contractual relations with this publisher. Furthermore, VMware’s virtualisation products are absolutely essential to support the large public and private organisations that use them in their digital transformation strategies and in controlling their infrastructure costs.

In contrast, Broadcom is seen by most of its customers as an aggressive player, with practices that could be described as abusive and unfair. The previous takeovers of CA Technologies in 2018 and Symantec in 2020 have led to changes in commercial and contractual practices that the customers of these companies judge very harshly. In a letter dated December 2020, to which Broadcom’s management never saw fit to respond formally, Cigref already denounced the difficulties and growing irritation expressed by its members regarding the supplier’s pricing and contractual policy. This letter denounced, on the one hand, the price increase on the mainframe part, judged arbitrary and indecent by the customers, and on the other hand, the use of a standard contract with legal clauses that were unacceptable to them (and non-negotiable without a commercial ‘effort’ on their part).

Cigref is therefore concerned about the consequences that Broadcom’s acquisition of VMware could have on the vendor’s practices, as Broadcom’s executives have publicly indicated that they plan to double the margins generated by VMware within three years of the acquisition. Such a goal could only be achieved by cutting a substantial number of VMware employees and unjustifiably and unilaterally raising the prices of VMware products. The buyouts of CA Technologies and Symantec have set precedents that reinforce the likelihood of such a disturbing prospect.

In addition, since the announcement of the proposed acquisition, several of VMware’s customers have reported behaviour that could characterise an « early completion » of the merger, including Broadcom’s control of VMware’s ongoing business operations and the limitation of certain contractual terms. The prohibition of « early implementation » is intended to ensure that a merger does not start to produce its effects on the markets concerned before the regulatory authorities, in particular the European Commission, have issued their clearance, conditional clearance or prohibition decisions.

With the forthcoming Digital Markets Act, the European legislator is aiming to reduce unfair practices by gatekeepers ex ante. Only a small number of very large digital platforms are targeted by the text, which Cigref welcomes. It is therefore our duty to remain vigilant and to call on the merger control authorities to take the necessary measures. Based on recurring reports from our Broadcom customer members, it is clear that Broadcom’s practices are in breach of the 11 Fair Principles that Cigref has just published with its European partners, Voice in Germany, Beltug in Belgium and CIO Platform Nederland.

Cigref is an independent, non-commercial association, founded in 1970, which supports its 150 members, large French companies and public administrations that use digital solutions and services, in all their reflections on their collective digital challenges. Our association works, for the benefit of its members, in favour of a sustainable, responsible and trusted digital environment.