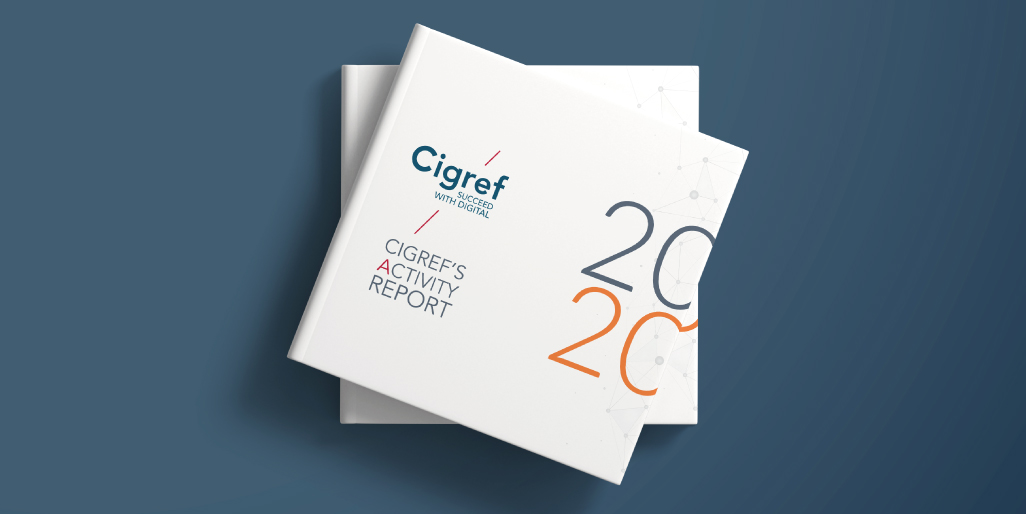 Cigref publishes a review of its activities for the period 2019/2020, in english. This institutional document presents the life of the association, and in particular its reaction to the health crisis, and reviews the issues raised by the many activities (clubs, circles and working groups) carried out during the past financial year. This report is also an opportunity for the President of Cigref, Bernard Duverneuil, to confirm the direction given to future work during this jubilee year: for a sustainable, responsible and trustworthy digital environment!

Cigref celebrates its first half century this year. Our association was formed in 1970 by six French companies under the impetus of Pierre Lhermitte, its first Chairman.

He had just published a book, “Le Pari informatique”, after carrying out a study in the United States on behalf of the Economic and Social Council in 1967 on the consequences of the rapid introduction of computing, within companies, which could serve to automate certain manual or mechanical company management tasks. Pierre Lhermitte had returned from this trip convinced of two things: that large French companies needed to collectively consider the challenges of winning this “digital gamgle” (as per the book title), and that they needed to join forces not only to best assess these transformations, but also to discuss them with one omnipresent supplier during that era, a certain IBM.

Since then, Cigref’s objective has not wavered, even if the fields of computing usage, and the information technologies themselves, have broadened considerably to encompass all the essential and even the most core functions in a business. And so for fifty years now, Cigref has accompanied its members, large corporations and public administrations in inspiring, synthesizing and disseminating their common ideas about the issues at stake. Cigref has also organised the group dialogue with their main suppliers, whose power and current tendencies to hegemony have seen few equivalents in the history of the world economy. I have three salient observations to make in this 50th anniversary year.

The first observations is obviously the unprecedented worldwide circumstances prevailing since early 2020. First of all, a public health crisis, the severity, virulence and magnitude of which have plunged more than half of humanity into a lockdown situation that no-one would ever have imagined could happen. Then there is the economic and social crisis, the medium-term consequences of which have not yet been fully assessed. However, we do already know it will plunge France into a recession this year, wreaking havoc on employment, which will inevitably lead to an increase in job insecurity, poverty and social deprivation. We have all seen how digital technology has been one of the main shock-absorbers of the crisis. Under the circumstances, Cigref’s ambition is to enable digital technology to be the main driver of the economic recovery and of the preparation for the future. This is the main thrust of the “Pacte pour le numérique” (Pact for digital agenda) on which our ecosystem has collectively invited governmental bodies to act.

The future, indeed, and the second observation I’ve made this year concerns the future. Cigref published its first strategic orientation report. This significant forward-looking work, that we have conducted with our partner Futuribles, transforms Cigref’s prospective work into a more reactive, more dynamic annual cycle. It is better aligned with the accelerating pace of the successive digital changes that our members have to face. This strategic orientation report, based on the five transformation field we have decided upon, sheds light on the outlook for 2025-2030. It has been entitled “The age of reason… what’s next?” It is intended to be the main tool used by the Cigref Board of Directors to prepare the Cigref annual agenda Cigref proposes to its members.

In 2019, we were hoping for this period to be the age of reason for digital technology. This brings me to the third observation that I would like to share with you. Cigref’s aim of promoting sustainable, responsible and trustworthydigital world has been reinforced, both by the public health, economic and social crises we are experiencing, and by the foresight work for 2025-2030 that we have conducted over recent months. All of our work and all of our analyses converge towards this radical demand for a paradigm shift in the way we have hitherto addressed the development and integration of digital technologies and their uses, both in our workplaces, which falls under our remit as practitioners, and in our private lives as digital citizens. These questions, now crucial to our societies, concern each and every one of us. We are therefore going to continue to develop our work towards the digital technology that we want, the digital technology that our organisations and their employees need, the digital technology that is desirable for the society in which we wish to live, in France and in Europe, and the digital tech that is yet to be invented, so that digital can be organised consistently in a sustainable, responsible and trustworthy way.