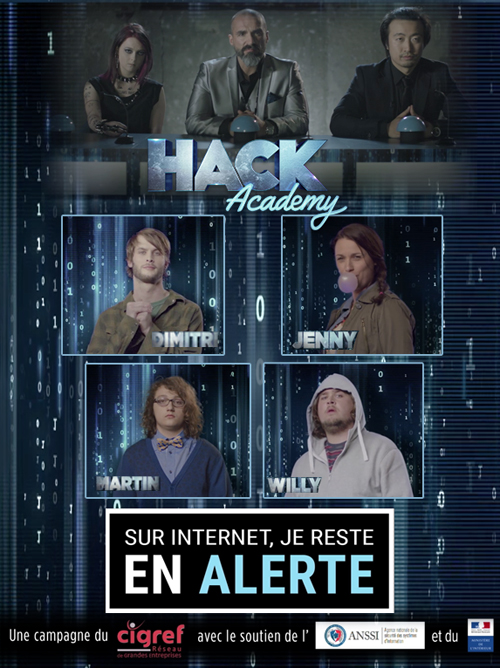 CIGREF undertakes many actions in the field of cybersecurity: information, education, publications, awareness… After creating a serious game called “Keep an Eye Out” designed to involve company’s employees in preventing digital risks, CIGREF now raised a public awareness campaign, called the “Hack Academy “. Initiated on October 1st 2015, this campaign wants to raise awareness among citizens through 4 episodes addressing 4 different digital risks one’s can be exposed to.

Raising awareness about cyber security is far too important to be tackled ”seriously”. This is why, Pascal Buffard, President of CIGREF says that, to launch this campaign, humor appears as a better way than fear.

“First, using the metaphor of reality shows enables us to address a larger audience Secondly, using the stereotype of the Hacker that we usually see in movies, could be meaningful to everyone”.

The four candidates of the Hack Academy share their own talents with the jury:

This campaign, supported by ANSSI (the French network and information security agency), promotes the following message ”on the Internet, I stay vigilant!”

Cigref publishes a review of its activities for the period 2019/2020, in english. This institutional document presents the life of the association, and in particular its reaction to the health crisis, and reviews the issues raised by the many activities (clubs,...
Lire plus

#DigitalSobriety - Cigref publishes the report "Digital Sobriety : A responsible corporate approach", in partnership with The Shift Project, resulting from the reflections of its eponymous working group, led by Christophe Boutonnet and Hervé Dumas. [calameo...
Lire plus