The economy at the risk of cybersecurity 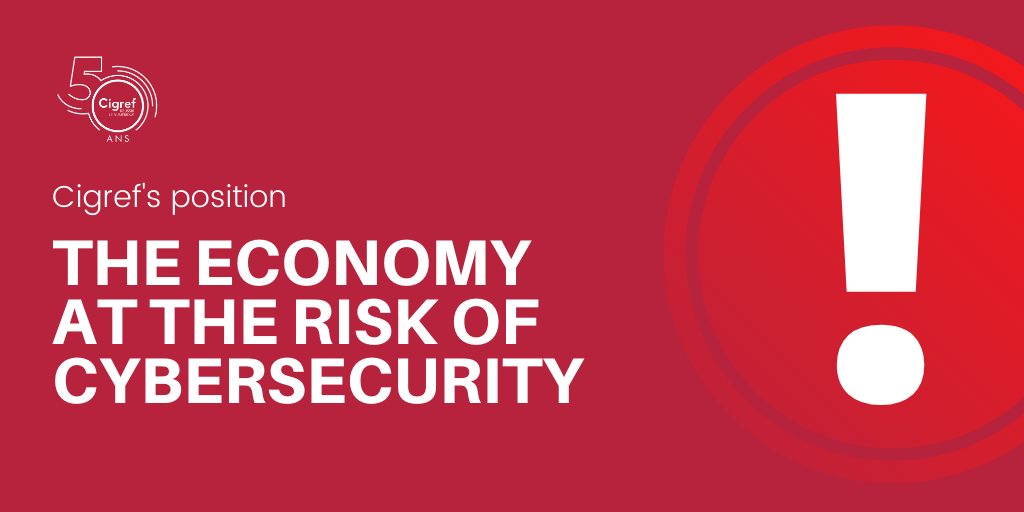 On Friday 13 November 2020, Cigref addressed a letter to Mr Jean Castex, the French Prime Minister, to express the concern of large French companies and public administrations about the growth of cyber-attacks. These attacks, which are increasing in number and intensity, are affecting more and more organisations, public or private, and constitute a growing threat to the economy. For Cigref, this situation is no longer acceptable.

The activity of companies and public administrations under great threat

These attacks jeopardise the activity of companies and public administrations. More and more human, technical and financial resources are being allocated by companies to the security of their information systems, to the detriment of their capacity for innovation and competitiveness. The operating losses of the hundreds of companies, large and small, that have suffered a cyber-attack are no longer anecdotal, as the news all too frequently demonstrates.

The French State is already making substantial efforts to deal with the cyber threat, in particular through the action of the French National Agency for Information Systems Security (ANSSI). Cigref notes the inadequacy of the international community’s and States’ responses to the reality of a worldwide threat, industrialised by criminal organisations with dreadful efficiency. No sector of activity other than the digital sector would agree to develop in such a context of legal insecurity in the face of the cyber threat.

Cigref also draws the Prime Minister’s attention to the responsibility of digital systems suppliers. Indeed, the practices generally observed, particularly among software publishers, are not insufficient and must be regulated to strengthen the overall security of information systems.

Acting quickly: Cigref presents its proposals to the Prime Minister

In this context, Cigref urges the Prime Minister and its Government to act without delay to initiate or reinforce the necessary steps, at national, European and international level, to provide a response in terms of resources and law that will make it possible to strengthen the security of the economy faced with this delinquency.

Cigref is fully committed to participating, at its level, in the necessary effort and presenting its proposals for strengthening the digital security of the national community and its economy, in an European context.

Cigref publishes a review of its activities for the period 2019/2020, in english. This institutional document presents the life of the association, and in particular its reaction to the health crisis, and reviews the issues raised by the many activities (clubs,...
Lire plus

#DigitalSobriety - Cigref publishes the report "Digital Sobriety : A responsible corporate approach", in partnership with The Shift Project, resulting from the reflections of its eponymous working group, led by Christophe Boutonnet and Hervé Dumas. [calameo...
Lire plus