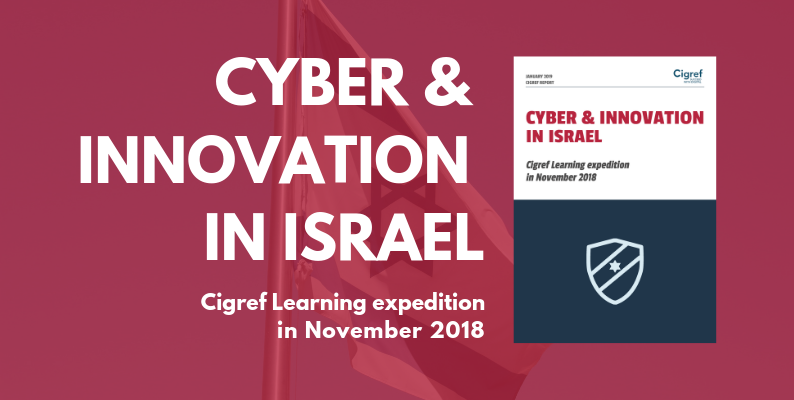 A Cigref delegation led by Jean-Claude Laroche, CIO of Enedis, Cigref Director and Chairman of Cigref’s Cybersecurity Circle, spent four days in Israel, from 11 to 15 November 2018, looking at the twin subjects of innovation and cybersecurity. The Cigref delegation was composed of some twenty representatives of Cigref member companies, accompanied by three members of parliament sitting on the Commission Supérieure du Numérique et des Postes (Higher Committee for Digital Technology and Postal Services), Mireille Clapot, Christine Hennion and Eric Bothorel, by the General Secretary of the Committee, Ludovic Provost, and by our partners Shushane&Co and Sia Partners.

The delegation’s four-day expedition included numerous meetings with the leaders of Israeli startups, top Israeli officials such as the Director General of the National Cyber Directorate, the Israeli equivalent of the French National Cyber Security Centre, the Chairman of the Israel Innovation Authority, members of the Knesset, Israeli parliament, and the director of the Ben-Gurion University’s Cyber R&D centre in Beersheba.

As part of this trip to Israel, our delegation was honoured to be received by the French Ambassador in Tel Aviv, Hélène Le Gal, for a reception to which she had also invited representatives from French tech firms operating in Israel. In the twin field of technological innovation and cybersecurity, Israel plays a unique role on the global stage. The self-described “startup nation” has managed to carve out a niche for itself as a central R&D hub for the world’s tech giants and investors. For over ten years, as part of a highly determined effort, all stakeholders in Israeli society – public and private, military and civilian, academic and economic – have worked together to develop a coherent, thriving ecosystem focused on digital technologies and cybersecurity. While this high rate of innovation can probably at least partly be explained by Israel’s one-off geopolitical situation, we think that there are lessons to learn from how Israel paved the way for this remarkable success story, which made an impression on every single member of the delegation.