The outlook for 5G in 2030 in France and Europe 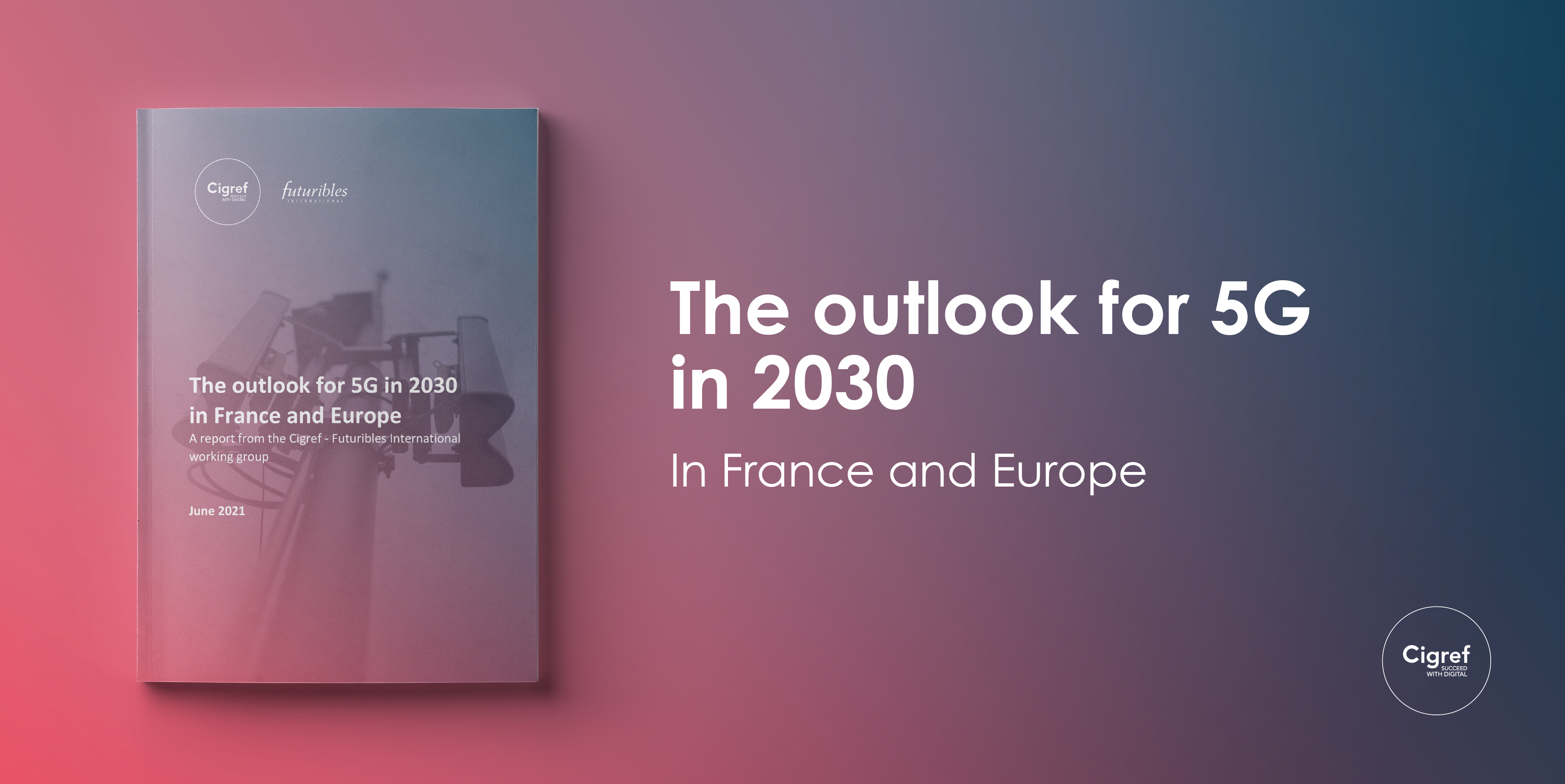 In collaboration with Futuribles International, Cigref has published a report on the work of the « 5G Outlook to 2030 » working group, led by Anne Lucas, Head of Strategic Information Management and Capitalisation at Acome, for Futuribles, as well as Djilali Kies, Chief Information Officer at TDF, and Gilles Lévêque, Director of Information Systems at the ADP Group and a Cigref director.

The goals of the approach

5G network technology is seen as a structuring trend for the next 10 years. It is presented as “the answer” to the economy and society’s growing communication needs.

5G is currently being rolled out around the world and offers several features that complement the previous 2, 3, and 4G generations, includingvery high speed, low latency and the guarantee of a specific quality of service per function (slicing). These characteristics pave the way for new industrial applications and are accompanied by multiple promises and upheavals in functions and markets. However, 5G raises security, geopolitical, health and environmental concerns that have been widely relayed in the media and social networks.

In this context, companies and public administrations must make strategic structural choices for the future in telecommunications. More than ever, they need a perspective that allows them to take advantage of this technological opportunity while reducing the risks to their activities, without compromising their social responsibility in terms of telecommunications.

To tackle these challenges, Cigref and Futuribles International have joined forces to study and forecast 5G’s future in 2030 with the goal of highlighting potential trajectories and providing members with the information, or at least some of the information, needed to take decisions.

There are five key takeaways from this study that will structure the future of 5G.

First of all, 5G is an illustration of the close links that exist today between global geopolitical stakes and national or even ultra-local problems, which were highlighted by the Covid-19 crisis.

This technology, like others, has been the subject of power struggles between major state powers on the international stage. But 5G, its rollout and functions, also reflect strategic choices and socio-economic and physical realities (infrastructure, etc.) that are specific to each country. Thus, governments, in their role as regulators and strategists, are faced with the need to organise these difference scales, not without difficulty.

Secondly, 5G foreshadows the international power struggles that will structure the next ten years and, undoubtedly, beyond.

The United States and China, of course, are the two countries most invested in this fight to be the world leader. This is demonstrated by their current investments for the next versions of 5G or 6G technology, even though 5G is just in the early stages of deployment. But the race that we are seeing around 5G and the subsequent technology also reveals the growing power of non-state actors who do and will continue to play a major role in the global geo-economic landscape. The links forged between companies and governments around these technological innovations (Huawei in China, for example), the large consortia of firms and university centres to develop new tools (Hexa-X project in Europe), as well as the key role of investment funds in financing research, development and production of all types of technical solutions, already show where the international decision-making centres will be located in the future (the Neuberger Berman fund, to name just one, dedicated a full portfolio to 5G in May 2020).

Furthermore, there is a paradox in 5G that reveals the current tensions between technological progress and the preservation of the environment.

5G is a tool to limit and reduce the environmental impact of industries or cities. However, the new functions promised by 5G could cause negative externalities for the environment. But, without these new functions, 5G is no more advantageous than existing networks. 5G, therefore, confronts the world with an equation of its environmental constraints. Resolving it requires developing the innovative devices needed to reap the benefits of 5G while limiting its energy costs.

Thirdly, beyond the purely technological aspects, 5G is a reminder of the fundamental importance of people.

Without competent human resources to implement the possibilities opened up by technology, the tool is useless. France and Europe still lack manpower in the scientific fields to exploit the range of applications and develop the promises of 5G. There is a great need for training and research. In addition, 5G, like any new technology, arrives with its vulnerabilities and industrial risks. These are mainly presented from a cybersecurity standpoint at this point because 5G is perceived as an amplifier of exposure to cyber risks. Again, new skills will be needed to prepare for it.

Finally, without equal access to this technology within France and Europe and, therefore, without a common strategy between the Member States, 5G will necessarily exacerbate social and economic divides in Europe and in France.

The study and outlook for 5G out to 2030 was carried out during six workshops that brought together more than thirty members with three external contributions, guided by Futuribles’ outlook analysis method. This allowed us to sketch several potential pathways for 5G in France and Europe. This report lays out the five scenarios retained within the framework of this study to provide food for thought and prepare companies for several potential futures.

These scenarios offer different hypotheses that come from the six key variables of 5G technology:

Variable 1: the speed of deployment and functions of 5G,

Variable 2: whether or not economic players adopt 5G,

Variable 3: the risks in terms of infrastructure resilience, cybersecurity and data protection on 5G networks,

Variable 4: the reaction of public opinions to 5G,

Variable 6: the interactions between global geopolitical issues and 5G technology.

The proposed outlook scenarios are not intended to predict the future but to offer markers of how the deployment of 5G in Europe could play out by 2030. Rather than trying to draw up an exhaustive list of scenarios, we chose to identify five:

Transatlantic 5G – France lines up behind the United States against Chinese power.

In this scenario, 5G is deployed unevenly among business sectors and among French regions. France and Europe have been weakened by the Covid crisis and by the shortages of raw materials to produce their own 5G technology. The United States is pressuring its historic allies to curb China’s rise to power in Europe.

Sustainable 5G – Innovation for the environment and regions in France.

France and Europe have invested in 5G so it can serve the common good by using it as a tool for regions and individuals. This strategic choice, which forces operators to offer equal access to the service and limits the negative environmental externalities of the technology, is part of the European Union’s independence mindset.

5G as a vector of power – Europe and France in the geopolitical race.

After the Covid crisis, Europe has chosen to free itself from all foreign influence and to establish its leadership at the international level by massively funding research and industrial initiatives in order to impose its standards and norms. However, the deployment of 5G, driven by an economic and productivist philosophy, is rejected by a part of the population, which slows down its adoption in certain regions.

5G is deployed to increase productivity and competition, and therefore rolled out unevenly in France. Regional disparities lead to marked discontent within the population, with a hardening of oppositions. Weakened by the Covid crisis, the European Union is unable to assert its technological independence, and leaves room for foreign players, including the Chinese.

With a lack of resources in a context of economic crisis linked to Covid-19, French operators and manufacturers have not been able to deploy 5G very widely in the country. This delay to telecom infrastructure has an impact on France’s economic vibrancy, amplified by the massive deployment of 5G internationally. The public has other concerns and is not opposed to this technology. The European Union traverses a deep institutional crisis and is not able to give directives of common regulations or develop a united industrial strategy: industrial autonomy versus alliance with China and the United States. This division leads to many cyber crises, and France has no weight.

Cigref has published a report on the work of its "Zero Trust" working group, led by Thierry Borgel, CIO of the ICADE group. Zero Trust is a development of IT security principles and a philosophy that organisations will need to adopt to strengthen the security of their...