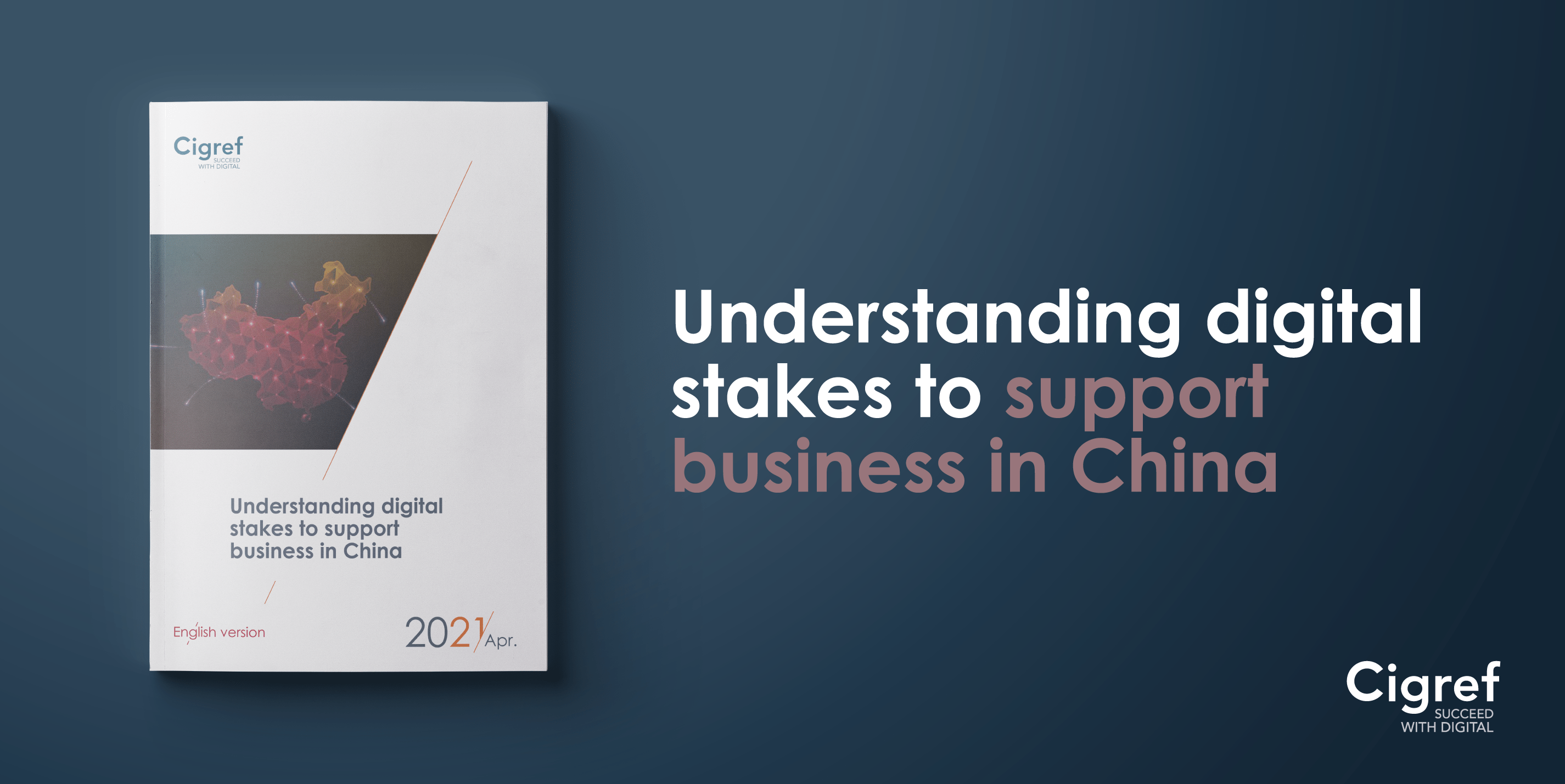 This is the translation of the Cigref’s report « Understanding digital stakes to support business in China » published in April 2021. This report, which is the result of meetings of a working group led by Jean-Michel André, Cigref Administrator, aims to give Cigref’s digital leaders, and more broadly anyone interested, some insights into the Chinese digital world.

This report is also available in French. Click here to consult the French version.

Working with China has become a necessity that offers important economic and technological opportunities for companies. The question that Europe, and more generally the West, is asking itself is how to work with this new, unavoidable and very special country. Cigref’s members wanted to conduct this study to understand the digital stakes and challenges in China, by understanding its ecosystem, which is very different from ours, its technological strategy and its regulations.

China, a global power with a proactive digital strategy

For several years now, China has been the world’s leading industrial power. It is also an economic power, certainly a technological one, and we can bet that it will soon be recognised as a financial power. The country accounted for 18% of the world’s GDP in 2020 and is projected to account for 25% of the world’s GDP in 2030, becoming comparable to the United States (US). China is also Europe’s 2nd largest trading partner. The two powers are now interdependent in all sectors, especially in industrial and digital area. The “Belt and Road Initiative”, a major infrastructure development programme, particularly in the digital field, enables China to take its place in international cooperation while defending its interests throughout the world.

Its “Made in China 2025” plan aims to internalise key technologies in China, with the idea of accelerating its leadership and mastering its entire value chain. China’s policy is to develop national champions. They can develop on a very large and dynamic domestic market and then compete on an international level. This ambition has been reinforced and revealed by the Covid-19 crisis.

In the digital sector, China has targeted its investments in strategic areas such as artificial intelligence, 5G, semiconductors, quantum computing and communication technologies. China is ahead of the rest of the world in many key areas such as e-commerce, super-apps – which encompass a wide range of functionality from messaging to online payment – and smart cities, which focus on security, mobility and flow management. The Covid-19 crisis and the associated lockdown have accelerated the adoption of digital tools in China, as the SARS crisis had already done: e-commerce, e-learning, drone delivery, collaborative tools, but also the development of artificial intelligence, 5G networks and the adoption of the cloud. China also started issuing its digital currency in April 2021.

Among cloud infrastructure providers, China has seen the emergence of champions such as Alibaba, Huawei, Tencent and Baidu, who dominate the Chinese market. They have a strong domestic presence and are gradually expanding into the international market.

Alibaba Cloud, based on a model similar to Amazon Web Services, dominates the Chinese cloud infrastructure market, with almost 40% of the market in 2020. This illustrates its robustness and application coverage in various fields from online retail to smart cities and smart manufacturing solutions. Tencent Cloud, which came from the entertainment and messaging sector, is also developing a cloud that is very competitive in terms of application coverage, performance and response time.

AWS and Microsoft have “regions” in China that allow them to have a small presence, but foreign providers, especially American ones, can only offer cloud services in the Chinese market if they put in place a Chinese joint venture, either by setting up a dedicated entity or through a joint venture or close collaboration with a Chinese player.

Any international company wishing to establish a sustainable presence in China must take into account infrastructure and network challenges. Due to Chinese regulations, the Great Firewall, and vendor strategies, cloud and network architectures in China are different from the rest of the world. The first constraint is therefore to build a network architecture using MPLS-type networks compatible with the national regulation and to ensure a reliable and correctly sized link with an operator approved on the Chinese market. National regulations, such as the Cybersecurity Law and the more recent Privacy Law, are major developments in the global privacy landscape and provide a very important regulatory framework for international businesses.

A market to be approached with caution

The Covid-19 crisis has exacerbated global and particularly Sino-American tensions, especially in the digital field. The technological rivalry and trade tug-of-war with the US are pushing China to support the development of its autonomy and to increase its international expansion. In this context, it is a major challenge for any European company to ensure its resilience in the face of growing geopolitical risks. The Chinese market is important, but it must be approached with vigilance, particularly with regard to confidentiality and data protection. By addressing a number of these issues, this report aims to give Cigref’s digital leaders, and more broadly anyone interested, some insights into the Chinese digital world.

This report is also available in French. Click here to consult the French version.